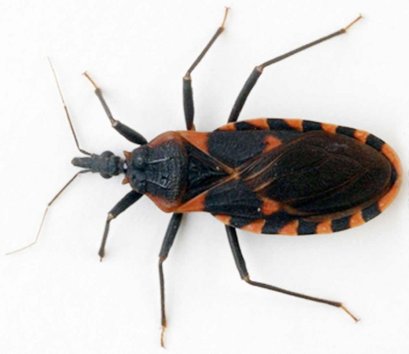 Chagas disease, caused by the parasite Trypanosama cruzi, is transmitted to humans and animal by insects (vectors) located in America, mainly in rural areas of Latin America. Humans can be infected by blood transfusions or tissue and organ transplants from infected donors, from a mother to her child (congenital transmission), orally by consuming contaminated food with faeces from infected insects, or by accidental exposure in the laboratory.

Clinical features: Chagas disease presents different clinical forms. In the acute phase some typical clinical manifestations can occur, like the Romaña's sign (swelling of the eyelids). However, as symptoms can be minor or atypical, the disease is not frequently detected in this phase. The indeterminate phase can appear 8 or 10 weeks later than the acute phase, and may remain silent for decades or even for life. In general, in this second phase, no symptoms appear, even though the serological diagnostic remain. It is considered that between 15 and 30% of the people that suffer the infection in an indeterminate form will develop cardiac, intestinal and neurological complications between 20 and 30 years after contracting the illness.

Incidence: The World Health Organization (WHO) estimates that Chagas disease affects 18 million people. It is spread in whole America, from the south of the United States to Argentina, affecting mainly poor and rural areas of Central and South America. Chagas disease constitutes a permanent threat for almost the fourth part of the Latin American population. It is estimated that approximately 8-11 million of people in Mexico, Central and South America have the Chagas disease, and the majority of them ignore they are infected.

Diagnosis: Detection of the pathogen, or of their products, in tissues or fluids of the host (parasitological methods) is not always easy, due to the low presence of the infectious agent and to the lack of sensitivity of the methods used. Serological methods are a valuable tool for the diagnosis of the infection: Indirect Immunofluorecence (IFA), Indirect Hemagglutination (HAI) and enzymatic ELISA tests. Currently, PCR technique has been introduced as a parasitological diagnostic method in the different stages of the illness- Molecular Biology permits the early detection of the newborns, avoiding false positives of the antibodies inherited from the mother.