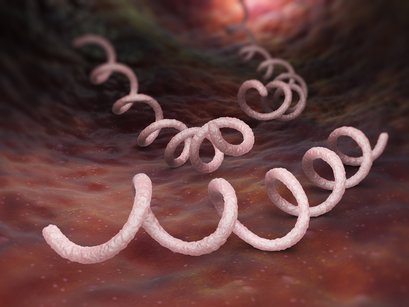 Syphilis is still a common sexually transmitted disease in many areas of the world cause by Treponema pallidum. The WHO estimates that the worldwide incidence of sexually acquired syphilis is 12 million cases per year. Syphilis can cause long-term complications if not treated correctly. Symptoms in adults are divided into stages: primary, secondary, latent, and late syphilis.

Clinical features: The disease is classified as venereal and it is usually notifiable, being its mechanism of transmission the direct contact with a productive lesion. After an incubation period of 12 to 90 days (average of 21 d), a primary injury appears in the place of inoculation, rich in Treponemes (chancroid), which spontaneously disappears in a few weeks. Soon after that, the treponema reaches the regional lymphatic system and then, by hematogenous dissemination, other parts of the body.In the untreated patient, the second stage begins with the appearance of one of the systemic manifestations of the disease: syphilitic roseola, accompanied by generalized symptoms and, often, of other localized signs (genital Condyloma), a skin rash, palms and soles. The open sores in this period are highly contagious. During the first and second year, similar outbreaks of lesser intensity can appear (phase of early latency) until all the signs and symptoms completely disappear (late latent phase). Patients in the tertiary phase develop localized lesions that affect the skin and mucous membranes, and cardiovascular and nervous systems. Usually, the main characteristic of tertiary lesions is the formation of destructive granulomas (gummas) and an almost total absence of treponemas. Bones, muscles and liver may also be affected.

Diagnosis: The identification of T. pallidum through direct examination of the lesion exudate - direct fluorescence (DFA-TP) - is a concluding test to ensure the diagnosis being the immediacy and low cost is main advantages. However, as in the majority of cases it is not possible to perform a direct diagnosis, serological testing is the most frequently used approach in the laboratory diagnosis of syphilis.

Serological tests for syphilis are subdivided into: non treponemal tests that measure IgM and IgG antibodies to lipoidal material released from damaged host cells and antibodies to lipoprotein‐like material and cardiolipin released from the treponemes. The most commonly used are RPR card and VDRL. The tests are used for screening and for determining the efficacy of threatment. They lack sensitivity in early primary syphilis and in late syphilis and it can appear a prozone reaction or false positive results. Treponema tests use T. pallidum subsp. pallidum or its derivates (recombinant proteins). They are used as confirmatory tests and in stablishing the diagnosis of late latent or late syphilis. The most commonly used tests are: FTA‐ABS, TP‐PA (T. pallidum particle agglutination) and MHA‐IP (micro hemagglutination assay to T. pallidum). Several tests using enzyme immunoassays (EIA) have being used as confirmatory test for syphilis. they have sensitivities and specificities similar to those of the other treponemal tests.