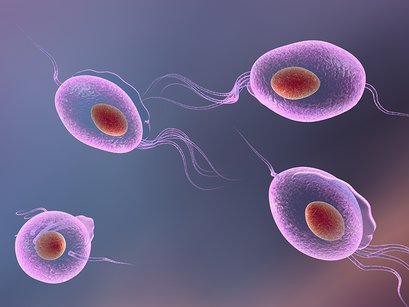 Trichomonas vaginalis is a flagellated protozoan that does not appear to have a cyst form, and does not survive well outside of its host. It resides in the lower genital tract of women, and in the urethra and prostate of men. It is a sexually transmitted disease can cause vaginitis, cervicitis and urethritis.

Clinical characteristics: Trichomoniasis is a common sexually transmitted disease (STD) that affects both men and women, although symptoms are more common in women. Each year an estimated 7.4 million new cases in men and women are recorded.
Most men with trichomoniasis do not show signs or symptoms, but some may feel a burning sensation after urination or ejaculation. Occasionally they may also have swelling or irritation of the prostate gland (prostatitis) or swelling in the epididymis (epididymitis).
Some women have symptoms of infection that include a frothy, greenish-yellow vaginal discharge that emits a strong odor. The infection can also cause discomfort during intercourse and urination, as well as irritation and itching in a woman’s genital area. In very rare cases, there may be pain in the lower belly. Symptoms usually appear in women within 5 to 28 days after exposure to the infection.

Diagnosis: In both men and women the diagnosis of trichomoniasis entails a physical examination performed by a health care provider, and a laboratory test. The parasite is harder to detect in men than in women. In women, a pelvic examination can reveal small red ulcerations (sores) on the walls of the vagina or cervix.
The diagnosis of trichomoniasis is primarily done through direct smear, culture, and more recently, by methods of nucleic acid amplification.

Treatment: Trichomoniasis can usually be cured with prescribed antibiotics, either metronidazole or tinidazole in a single dose taken orally.
The symptoms of trichomoniasis in infected men may disappear within a few weeks without treatment. However, an infected man who has never had symptoms or whose symptoms have stopped can continue to infect or reinfect female sexual partners if the infection is not treated. Therefore, both partners should be treated at the same time to eliminate the parasite.