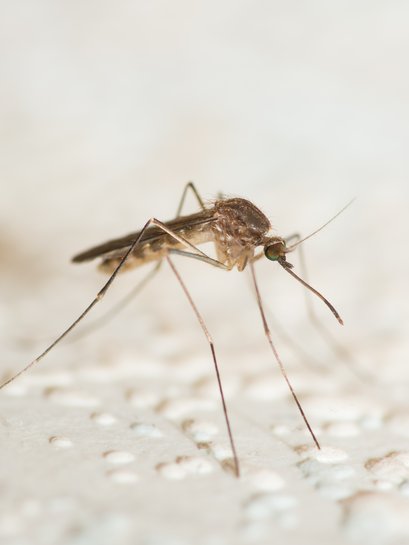 West Nile virus (WNV) is an emerging zoonotic arbovirus widespread in the world, it belongs to the family Flaviviridae, genus Flavivirus. Its genome comprises a single positive-stranded RNA molecule of about 11,000 nucleotides that encodes a polyprotein that is proteolytically processed to give rise to the 10 mature viral proteins.

It has a considerable impact on animal health and public health. Transmitted mainly by mosquito bites, its natural reservoir is made up of a wide range of wild bird species, which with their migrations contribute to dispersing the virus outside its endemic areas.

Clinical features: In general, symptoms appear between 3 and 14 days after exposure. An estimated 20% of people who become infected with WNV develop West Nile fever, with mild symptoms that include fever, headache and body aches, occasionally a rash and swollen lymph nodes. In many cases, the symptoms are so mild that they go unnoticed or undetected.

Diagnosis: This infection can be diagnosed by different tests like: Seroconversion of IgG antibodies (or a significant rise in antibody titers) in two serial samples drawn one week apart, determination by immunoassay (ELISA or CLIA), uptake of IgM antibodies by immunoassay (ELISA or CLIA), neutralization tests, virus detection by reverse transcription polymerase chain reaction (RT-PCR) and virus isolation in cell culture.

Treatment: There are no licensed vaccines for use in humans, nor specific antiviral treatments for West Nile virus infection. Over-the-counter pain relievers can be used to reduce fever and relieve some symptoms.

In the most severe cases, patients usually have to be hospitalized to receive symptomatic treatment, such as IV fluids, pain medications, and nursing care.